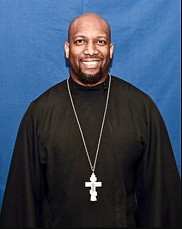 Born to Panamanian immigrants, Martin and Mayra Davis, March 25, 1980 in Brooklyn, NY. Samuel has a younger sister Rebekah, a graduate of Kean University, who lives in Somerset, NJ. The Davis family moved out to Somerset NJ in the Summer of 1984. His parents, nurtured him in their faith by their example and service.

He graduated from Franklin High School June 1998, and set out to pursue his dream to serve alongside his father by attending the University of Valley Forge. After two years, Samuel enlisted in the USAF where he served as a Security Forces Member at the NAS Keflavik, Iceland. While enlisted in the USAF, he reconnected with childhood friend Julitssa Dixon. They were engaged the following year, and were married on June 24, 2003.

One evening, after hearing a sermon, entitle “Prerequisites of His Presence” by Archbishop Veron Ashe, Samuel made a commitment to the Lord to serve the Holy Church in whatever capacity God would lead him. It was not until September 21, 2010 that Samuel was baptized into the Orthodox Faith. After receiving the blessing of his then hierarch, Samuel prayerfully began St Simon of Cyrene Orthodox Mission as a homeless outreach to meet the needs of the city of New Brunswick’s “untouchables.”

After administration changes, looking for a new home for the mission, Fr Jonathan Ivanhoff head of the Diocese of NY and NJ’s Missions and Evangelism proposed to Samuel for the mission to be received in the Orthodox Church of America. Samuel his wife Julitssa (Photini) and their children, Isaac, Morgan (Perpetua), and Ava (Felicity) were received into the Orthodox Church of America at SS Peter and Paul Manville, NJ. The Davis Family would embrace their second son, Alexander (Samuel) the following January.

HE Archbishop Michael tonsured Samuel a Reader on December 17, 2016. After completing his studies at the Diaconal Formation Program and graduating from Pillar College with a degree in Biblical Studies Samuel was ordained to the Holy Diaconate, Saturday July 1, 2017. This was an historic event in the life of the Diocese of New York and New Jersey. While diaconal ordinations are not necessarily historic, Deacon Samuel is the first Afro-Latino to be ordained to this office in the history of the Diocese.

Deacon Samuel enrolled in a one year program of studies at St Tikhon’s Theological Seminary this past Fall and decided to complete the whole three year degree program, was ordained to the Holy Priesthood by HE Archbishop Michael, Archbishop of the Diocese of New York and New Jersey on April 21, 2018. Fr Samuel is the first Afro Latino priest to be ordained to this office in the history of the Diocese and the second Black priest in the Orthodox Church in America, preceded by Fr Moses Berry. Fr Samuel was ordained in what has been a mission parish in the diocese, St Simon of Cyrene Orthodox Mission in New Brunswick, NJ.