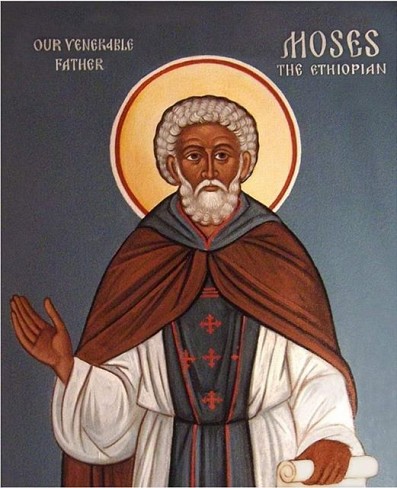 St. Moses the Black, whose life story is remarkable, was martyred. This saint took the Kingdom of Heaven by force, exactly as our Lord Jesus Christ said: "The Kingdom of Heaven suffers violence, and the violent take it by force." (Matthew 11:12). In his early life, St. Moses was a slave to people who worshiped the sun. He was a mighty man who loved to eat and drink excessively. He killed, robbed and committed all evil. No one could stand up before him, or challenge him. On many occasions, he lifted up his eyes to look to the sun and to talk to it saying, "O Sun!! if you are God, let me know it." Then he said, "And you O God whom I do not know, let me know you." One day, he heard someone saying to him, "The monks of Wadi El-Natroun know the real God. Go to them and they will tell you." Instantly, he rose up, girded his sword and went to the wilderness of Shehet (Skete). He met St. Esidorous (Isidore) the priest, who was frightened when he saw him, because of his appearance. St. Moses comforted him by saying that he came to the monks so that they might let him know the real God. St. Esidorous took him to St. Macarius the Great, who preached to him, taught him the faith and baptized him. He accepted St. Moses as a monk and taught him to live in the wilderness. St. Moses dashed in many worships, and fought a spiritual fight, which was greater than that fought by many saints. However, the Devil fought him intensively with his old habits of excessive eating, drinking, and fornication. He informed St. Esidorous about everything which came upon him in his fight with the Enemy. He comforted him and taught him how to overcome the snares of the Devil.
It was told about him, that when the elders of the Monastery slept, he used to go round to their cells and take their water pots and fill them with water, which he brought from a well at a far distance from the monastery. After many years in spiritual struggle, the Devil envied him, and struck him with a sore on his foot which made him sick and bed-ridden. When he knew that this was from the Devil, he increased in his asceticism and worship, until his body became as a burnt wood. God looked to his patience, healed his illness, and removed all his pains. The blessing of the Lord came upon him. After a while, he became the Father and the spiritual guide of 500 brothers, who elected him to be ordained a priest. When he came before the Patriarch to be ordained, the Patriarch wanted to test him by asking the elders, "Who brought this black here? Cast him out." He obeyed, and left saying to himself, "It is good what they have done to you, O black colored one. The Patriarch, however, called him back and ordained him a priest, and said to him, Moses, all of you now has become white."

One day, he went with some elders to St. Macarius the Great, who said to them, "I see among you one to whom belong the crown of martyrdom." St. Moses answered him, "Probably it is me, for it is written: 'For all they that take with the sword, shall perish with the sword.'" (Matt. 26:52). After they returned to the monastery, it did not take long until the Berbers attacked the monastery. He told the brethren, "Whoever wants to escape, let him escape." They asked him, "And you O father, why do you not also escape?" He replied that he had waited for this day for long time. The Berbers entered the monastery and killed him with seven other brothers. One of the brethren was hiding, and saw the angel of the Lord, with a crown in his hand standing by and waiting for him. He went out from his hiding place to the Berbers and he was also martyred.

His body is now located at Virgin Mary's Coptic Orthodox Monastery of El-Baramous in Egypt.