Who is St. Simon 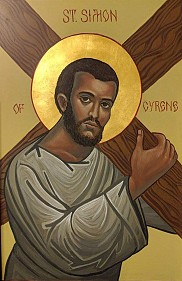 Who is St Simon of Cyrene

St Simon of Cyrene is mentioned in three of the four Gospels as the man compelled by the Roman soldiers to carry our Lord’s cross out of Jerusalem. St Simon’s act of carrying the cross, (patibulum) for Jesus is the fifth or seventh of the Stations of the Cross. Cyrene was situated in modern day Libya, on the northern coast of the African continent. Settled by Greeks in 630 BC and later infused with a significant Jewish population, Cyrene was the capital of the Roman district of Cyrenaica at the time of Jesus’ crucifixion. By then, Cyrene was home to a large number of Hellenistic Jews.

Many Jews from Cyrene had returned to their native land and were part of a community in Jerusalem called the Synagogue of the Freedmen comprising of Jews from many other provinces including Alexandria, Cilicia, and Asia (Acts 6:9). St Luke records men from Cyrene being among those converted at Pentecost (Acts 2:10). After the martyrdom of Stephen (Acts 7), believers from Cyrene were among the first scattered by the persecution in Jerusalem; arriving in Antioch, they preached to the Gentiles there (Acts 11:20). These believers were instrumental in the formation of the church of Antioch, where, for the first time, “the disciples were called Christians” (Acts 11:26). Tradition links St Simon with the “men of Cyrene” who preached the Gospel to the Greeks. (Acts 11:20)It was in Antioch where St Simon of Cyrene and his sons Alexander and Rufus served as prophets.

St Simon of Cyrene is mentioned in the Synoptic Gospels (Matt 27:32, Mk 15:21-22, and Lk 23;26). St Matthew only records his names and place of origin (Matt 27:32), but SS Mark and Luke say that he was “on his way in from the country” (Lk 23:26). St Mark, provides the most information about St Simon, adding he was “the father of Alexander and Rufus” (Mk 15:21), men obviously well known to St Mark’s readers. According to Tradition, the Rufus mentioned here is the same man St Paul greets in his letter to Rome, whom he calls “chosen in the Lord” and whose mother “has been a mother to me, too” (Romans 16:13).

O Simon, whose name is “hearkening” thou didst hearken unto the words of Jesus, who spoke to that other Simon, saying: Take up thy, and follow me.

His Cross became thy cross, and so, partaking of his sufferings, thou dost now partake of his life, light and glory.